Deadlifting With Hex Plates: How To Do It Properly

Found mostly in commercial gyms, hex plates have been the bane of existence for many lifters since they came into existence.

If you don’t know what they are, hex plates are weight plates with flat edges. While they are not truly hexagons in the literal sense of the word, they have flat edges that are a hindrance for anyone who does deadlifts.

But if you only have access to hex plates, how do you deadlift with them properly?

Here are six tips to follow to deadlift properly with hex plates:

Deadlifting with hex plates is problematic for a few reasons. But while it’s far from ideal, it is possible to do so safely by making a few adjustments to your routine.

In this article, I’ll discuss why deadlifting with hex plates is such a challenge and give you some practical tips on how you can deadlift properly with hex plates.

Why Is Deadlifting with Hex Plates a Problem?

If you’ve ever deadlifted with hex plates, you’ve likely noticed that when you put the bar back down, it landed at your feet in the most inconvenient fashion.

With standard bumper plates, it’s easy enough to roll the bar back into position even with just your foot, but the hex plate requires you to physically re-align the plates.

Also, if you get complacent, you could end up pulling the bar from a less than ideal position, which may lead to injury.

Another frustrating thing about hex plates is that they sometimes “shift” after you lift the bar off the ground. Gravity wants to pull the corner of the plate towards itself. This can be particularly annoying since you need as much stability in the bar as you do in your foot and body positions to deadlift correctly and safely.

Furthermore, you are at a higher risk of injury both during the lift when trying to hold the bar steady as the plates shift and when realigning a heavily loaded bar to set up for your next rep.

This all becomes even more problematic when you have a bar loaded with 3-4 hex plates on each side.

Related Article: Hex Dumbbells vs Round Dumbbells: Which Are Better? 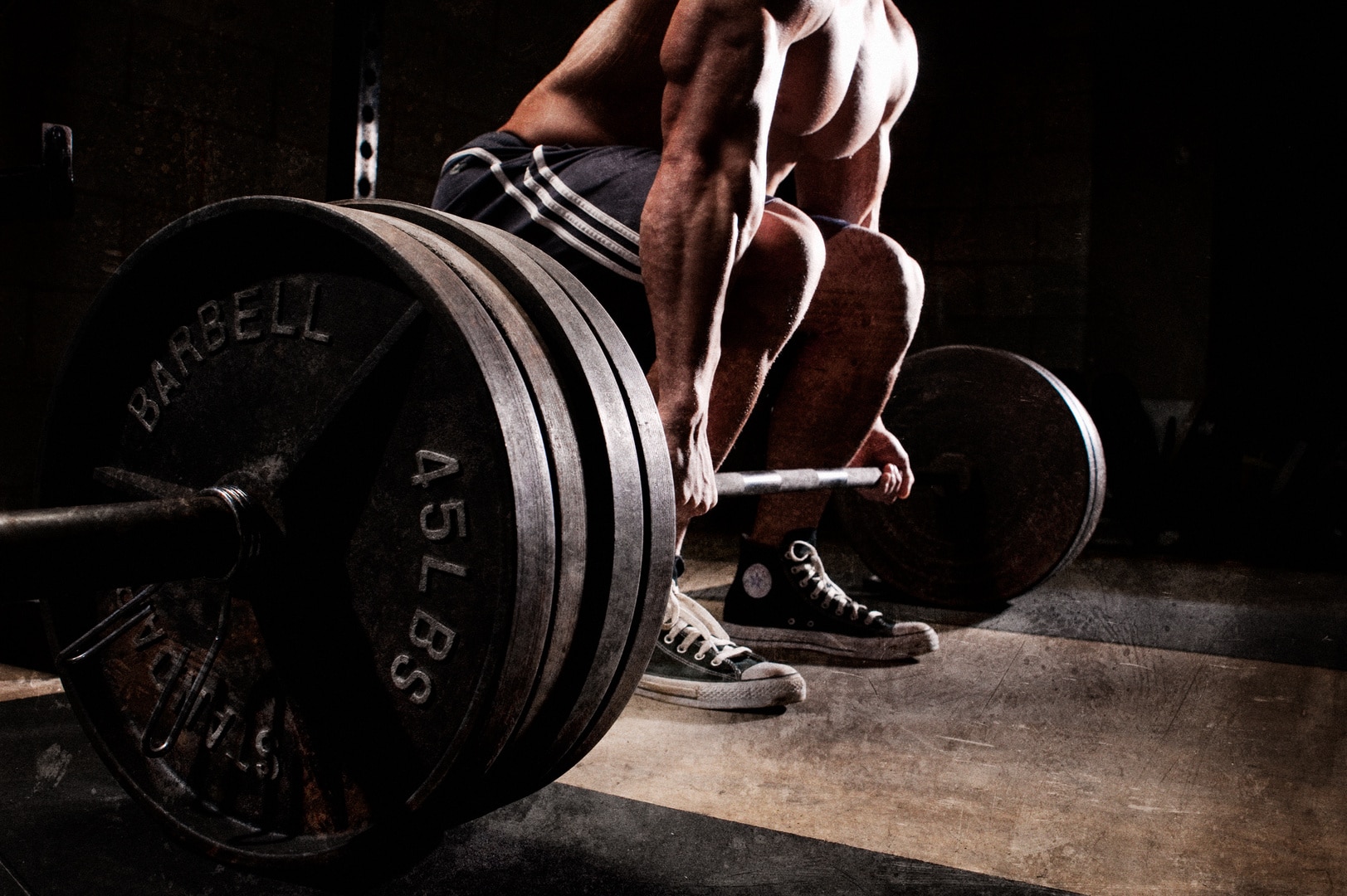 If all you have is a commercial gym and the dreaded hex plate, all is not lost. After all, deadlifts with hex plates are better than no deadlifts at all.

Below are six tips that will allow you to deadlift safely and correctly with hex plates.

1. Start with the Correct Bar Position and Reset the Bar with Every Single Rep

Yes, resetting the bar after each rep will slow you down, but it’s important that you take the time to do this. It will help ensure that the bar is aligned properly and you’re able to get into the correct starting position each time instead of having to pull the bar when it’s uneven, which can cause injuries.

2. Avoid Rapid Pulls and Lower the Bar Slowly Back Down to the Ground

Not doing fast pulls and slowly lowering the bar to the ground won’t stop gravity from doing its thing. But it will help reduce the amount of resetting you’ll need to do in between each rep. This is because you’ll be able to remain in control of the barbell and plates the entire time, and it’s easier to get the plates to land on a flat edge when you’re moving slowly.

This approach comes with the added benefit of being an eccentric as well as a concentric movement. This means you are contracting your muscles on the way up and elongating them on the way down, which will help improve your overall strength.

Touch and go deadlifts refer to reps that are completed without any pauses in between. When you lower the barbell back down, you don’t let go of the bar. You simply bring it down and then pull it straight off the ground again.

In general, it’s not recommended to do touch and go deadlifts unless you’re doing a CrossFit WOD or other similar type of workout because it’s easier for you to bounce the plates off the floor. This makes your next rep much easier because it adds momentum to the bar instead of forcing you to pull it from a dead stop.

It’s also not ideal for competitive powerlifters since you won’t do touch and go reps in competition. Furthermore, it’s harder for you to maintain tension when you’re trying to do as many touch and go reps as you can as quickly as possible.

But when you’re deadlifting with hex plates, touch and go reps are a better option. You can still bring the bar all the way back down to the ground, but you’re not stopping for a long enough time at the end of the rep to allow the bar to roll. And since the bar doesn’t come to a complete stop, it doesn’t matter if the plates don’t land on a flat edge.

4. Opt for a Romanian Deadlift Instead

Because you don’t lower the bar all the way down to the floor, Romanian deadlifts are a suitable way to deadlift with hex plates since you don’t have to worry about the bar rolling away from you or the plates not landing on a flat edge at the end of each rep.

While technically not a true deadlift because you’re not pulling the bar from the ground for every single rep, it’s still an excellent movement for building your posterior chain.

Like Romanian deadlifts, rack pulls technically aren’t a true deadlift. But when you’re working with hex plates, you can position the rack as low as possible so that you’re able to put the bar down almost to the floor. This allows you to get close to a full range of movement without the plates ever needing to touch the ground.

Hex plates have been a problem for powerlifters and anyone else who enjoys deadlifts for a very long time. As a result, some bright spark invented hex bumpers.

The hex bumper is a clever device that you can keep in your gym bag to wrap around the hex plate, instantly converting it into a round bumper plate.

These aren’t a totally perfect solution. They’re expensive, and if you can pull a lot of weight, you’ll need enough of them to cover all of the plates you use. And they add about an inch of height. While that doesn’t seem like much, it can still throw off your starting position since you’re not starting with the bar at the correct height.

Each hex bumper also weighs four pounds, so you’ll have to consider that extra weight when you’re loading the bar.

But using hex bumpers certainly beats having to try to find a new gym, and the cost and minor inconveniences may be worth the extra peace of mind that you’ll be able to deadlift safely even with hex plates.

Why Are Hex Plates So Annoying?

Hex plates are annoying to deadlift with because of the way gravity works.

No matter how hard you try, the hex plate always wants to land on a corner. And because of Murphy’s law, one plate rolls forward onto its edge while the other rolls backwards. This leaves you with a less than ideal bar position for going into your next rep.

Not only does this make placing the bar back down on the ground a little awkward but it is also really inconvenient to have to reset the bar before you start your next rep.

Why Do Hex Plates Even Exist?

The question of why hex plates even exist is a legit one. To most powerlifters and any other gym-goer who enjoys doing deadlifts, it seems completely illogical to design a weight plate with flat edges.

Who knows what went on in the mind of the creator. Ultimately, it doesn’t even matter.

What matters is that they are still in many commercial gyms. If hex plates are all you have access to, you need to know how to make the most out of your deadlift workouts with them. This includes doing slow and controlled reps, trying different deadlift variations, and coming up with creative ways to prevent the bar from rolling every time you lower it to the ground.

Why Do Commercial Gyms Have Hex Plates?

It’s hard to figure out why every gym owner chooses the equipment they do, but we can take a guess.

For some, it could be inexperience or not knowing why hex plates are even an issue to begin with. For others, it could be a strategic decision to discourage people from dropping the barbell at the end of their set or from deadlifting at all.

There is never any need to deliberately drop or throw the bar, but if you’ve ever maxed out on your deadlift, you know that placing the bar down delicately at the end of your set is the least of your concerns.

This is just one reason why most powerlifters tend to avoid commercial gyms. The people there just don’t get us!

What Are Hex Plates Good For?

Hex plates work just fine when used with fixed machines such as the Smith machine or leg press. You can even use them for bench presses, rows, squats, or any other movement where you’re not pulling the bar straight off the ground.

In fact, for most exercises, hex plates aren’t even an issue. It’s just their shape that causes a problem when deadlifting.

If you can avoid using hex plates for deadlifts, do. It’s difficult to get the plates to land on a flat edge every time you lower the bar to the ground, and having to fight against the bar’s inclination to roll away from or towards you can cause injuries. It’s also frustrating to have to take extra time to reset properly after each rep.

Amanda Dvorak is a freelance writer and powerlifting enthusiast. Amanda played softball for 12 years and discovered her passion for fitness when she was in college. It wasn’t until she started CrossFit in 2015 that she became interested in powerlifting and realized how much she loves lifting heavy weights. In addition to powerlifting, Amanda also enjoys running and cycling.

PreviousRPE vs RIR: What Are The Differences? How To Use Them?
Next10 Best Hyperextension Alternatives (With Pictures)